Welp, despite having a cold over Thanksgiving weekend, I caught another one last Thursday. Yuck. I stayed home on Friday to keep from spreading my germs, but despite a gross runny nose, I managed to have quite an amazing weekend!

I wrongfully planned to go to work, but thanks to Matt, I stayed home. There is no reason to put others at risk for getting even a cold! But I still got up with Matt and enjoyed our morning together. We started with cereal: shredded wheat, cinnamon, frozen grapes, and milk for me. I love how the milk looks on the frozen grapes!

Matt spoiled me/us and made this epic omelet using our other Nourish breakfast bowl. He used three eggs and added a little more cheese. He had a hash brown patty with it plus avocado for us both. I then sipped on my coffee and tried to relax. I’m grateful I never lost my sense of taste!

Melt my heart! We swear Mason is channeling some through Jackson. He’s always been a big-time cuddler, but he didn’t quite snuggle like this. He now begs Matt to hold him and won’t let go. He had been laying his head down on his shoulder right before I took this photo. ❤

I got to work dusting, vacuuming, taking out the trash, and unloading the dishwasher. I don’t like just sitting still for long plus I wanted to get rid of any germs that I could!

I had a leftover bean burger for lunch that I topped with pickles and siracha. I enjoyed the last of our roasted green beans and blue corn chips on the side. 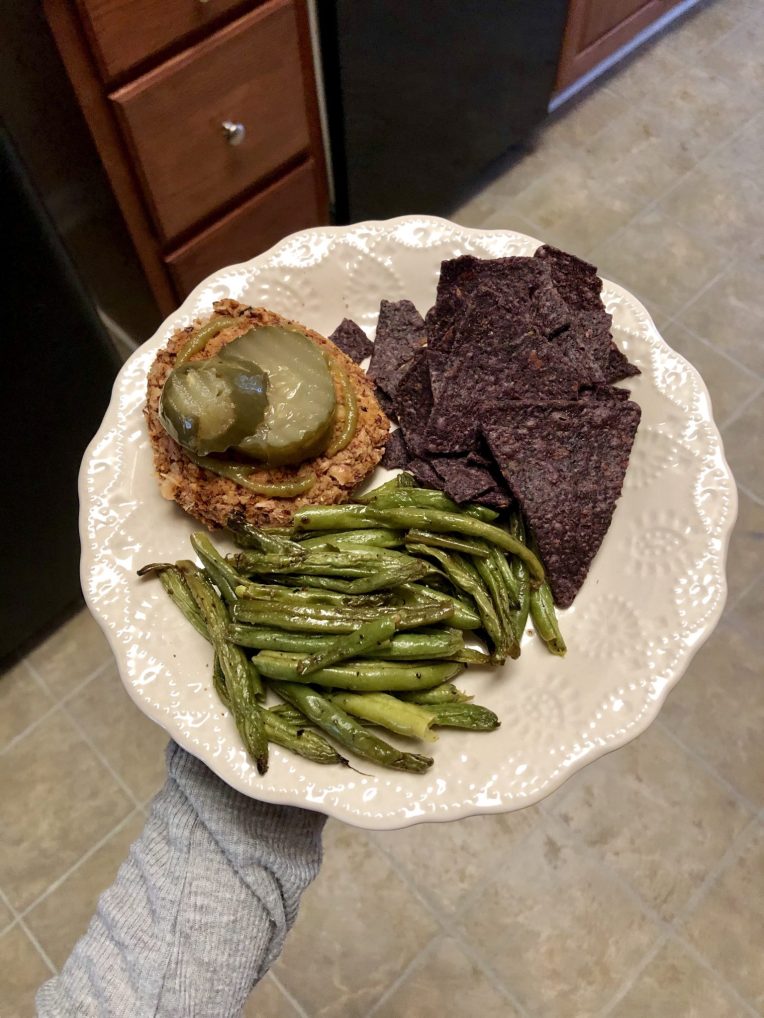 I showered and did feel somewhat better thanks to the hot water. I had to run an errand then came back home and tried to lay down for a bit. Unfortunately, they continue to build new town homes out front of our home, and the noise was awful. Not to mention they have ruined our once beautiful view. But land on which to build is money to our town home owners. Pft. So my nap was short-lived.

I noshed on this ripe, juicy red pear with almond cashew butter. It was pear-fect. 😉

I later ate some carrots dipped in Sabra roasted garlic hummus. I’ve been craving hummus something strong lately, and I have no problems satisfying this craving often!

For dinner, Matt and I made grilled cheese and spinach sandwiches dipped in puttanesca pasta sauce that we simmered until bubbly and hot. We used Sargento four-cheese blend slices along with crumbled cojita. We cooked them in butter sprinkled with garlic powder and smoked paprika. It was a very comforting meal.

I had picked up these home made macaroons recently from Remedy Coffee Shop, and Matt and I split them. One was apple cinnamon, and the other was chocolate caramel with sea salt. Both were so rich, delicious, and enjoyable! I also had a mug of Greek yogurt with pb. We watched The Office then I had to get to bed. I was pooped.

I got up an hour or so before Matt and just relaxed with this epic breakfast and coffee. I chopped old fashioned oats down to a more quick cooking texture, scrambled in an egg, a splash of milk, 1/4 t baking powder, and cinnamon. I microwaved it all in a mug until it was set, then I transferred it to a plate. I topped my oat muffin with almond cashew butter and had Greek yogurt with brown sugar and a delish crisp apple on the side. I can’t wait to make another one this week!

I got ready, and then Matt and I made our way to Vienna Coffee Co. in the Regas Building downtown. I had never been to this location, and it is so nice! 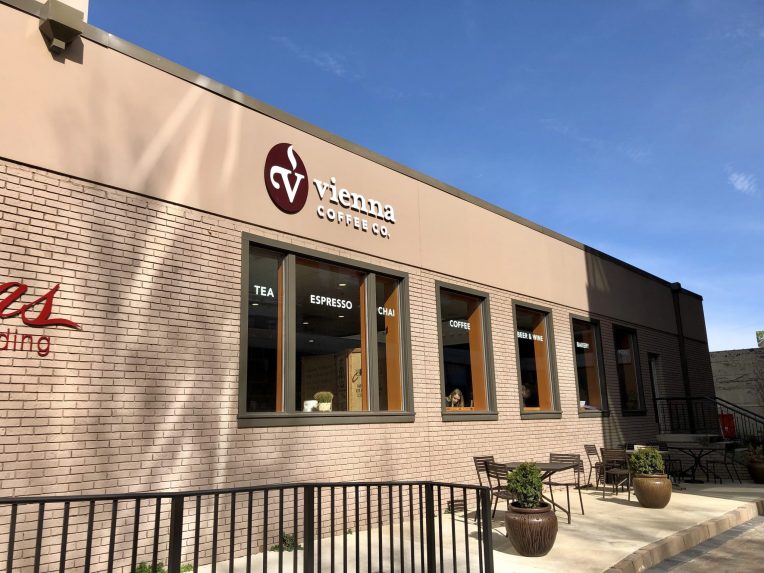 You may recall that they offered very creative Stranger Things-themed drinks last fall. This time they have gone with The Office. They are killing it! 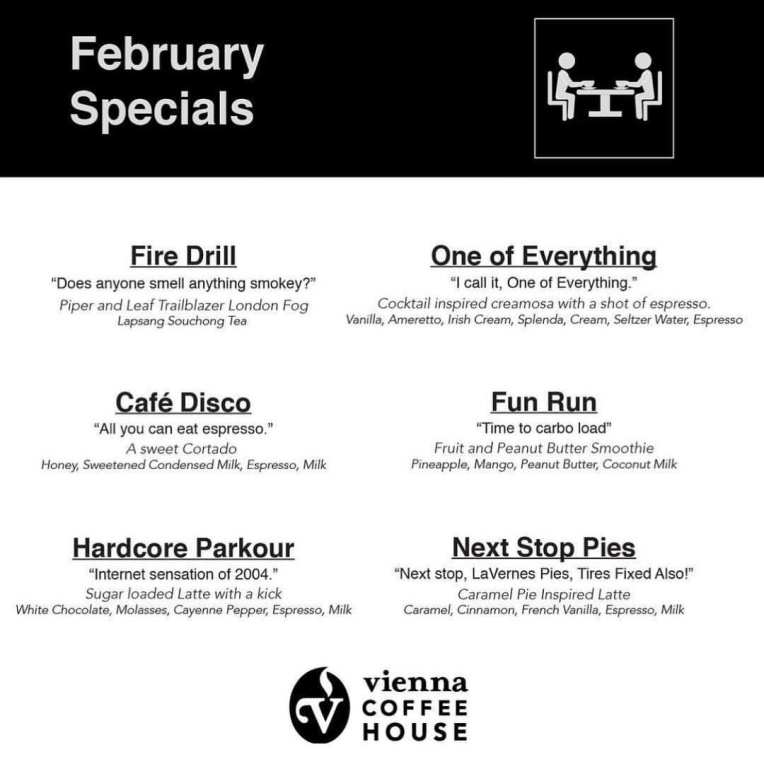 I chose their, “Next Stop, Pies” latte while Matt had their “Hardcore Parkour”.

‘Tis grainy, but if you don’t sip your Office-inspired latte while wearing your Dundler Mifflin sweatshirt, then you aren’t doing it right. 😉 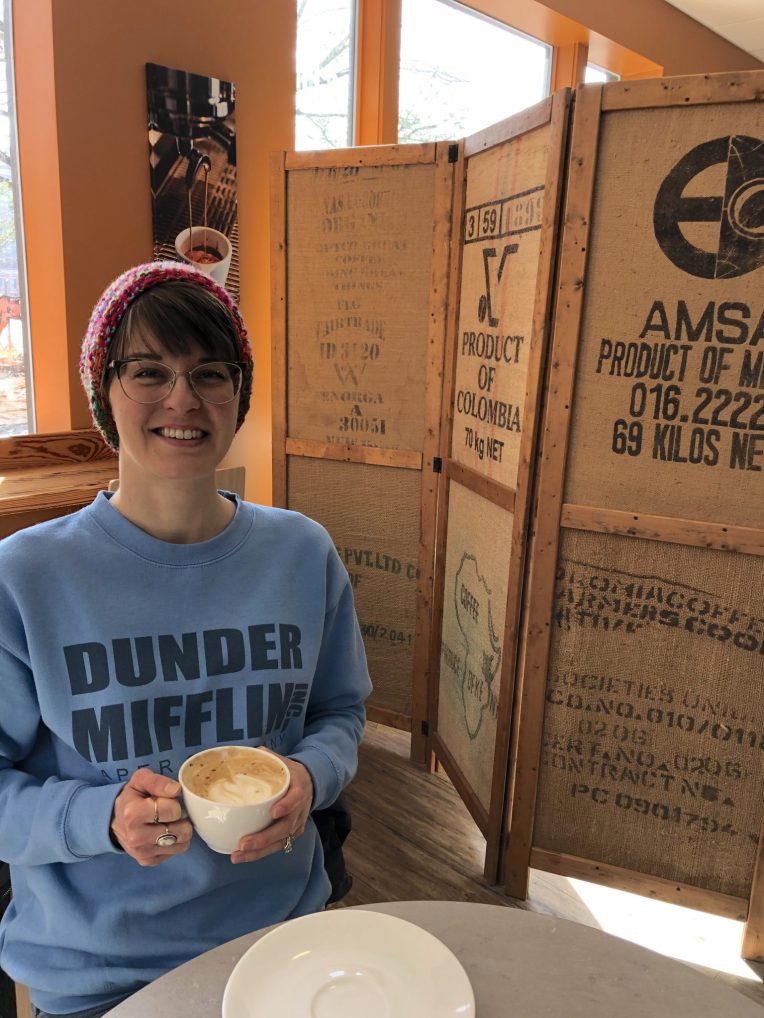 We saw these on the way out, and I thought they were SO cute! Owl succulent planters. Supah adorable.

Matt and I browsed a new fabulous store called Jacks of Knoxville that is full of the prettiest artwork! I bought two things that I’ll share later in this post.

Matt and I drove around a few neighborhoods, looking at some homes we’ve seen for sale, then we went to Pho 99 for a pho-nomenal lunch!

Matt and I had just watched The Office episode when Michael Scott’s alter ego “Date Mike” revealed himself, and Matt was being goofy for my photos. We then realized he had a “Date Mike” look to his expression. Hi-larious! 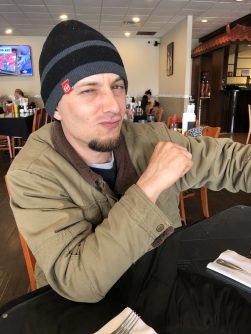 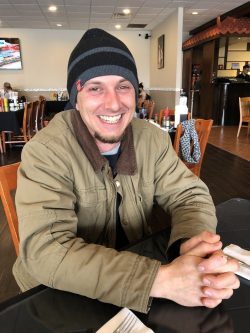 Matt had their beef pho, and it was so full of flavor. 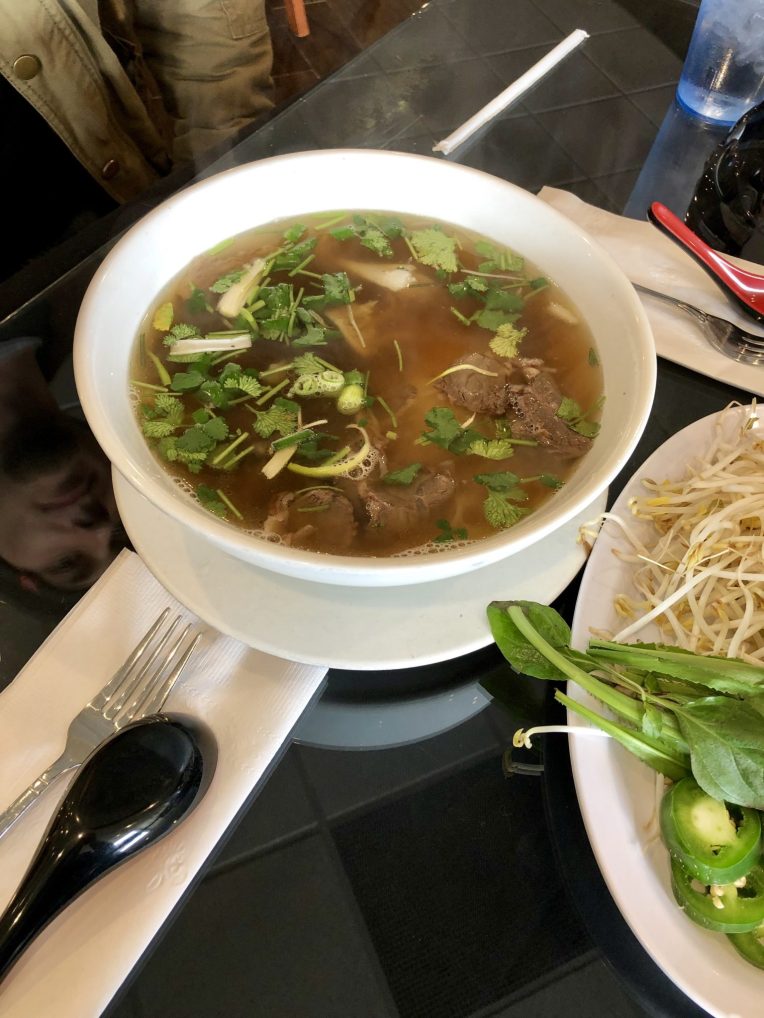 I went with their vegetable and tofu. We both ordered a large so that we could have leftovers, but somehow mine came with so many more noodles.

All garnished and ready to be slurped. 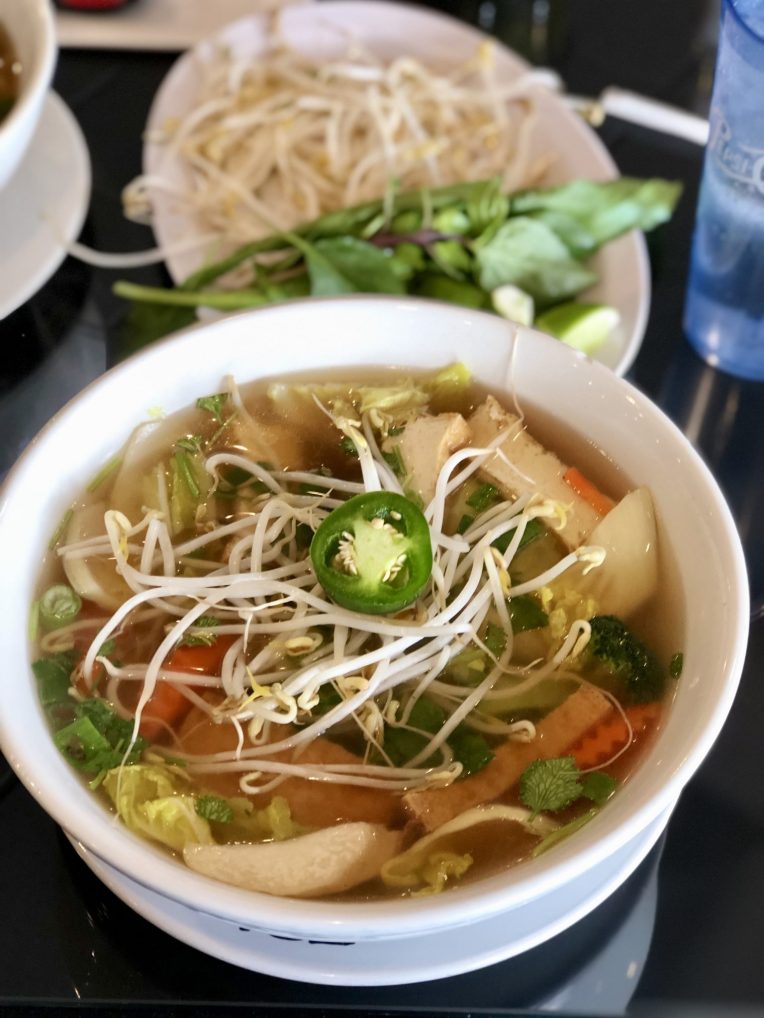 A talented young woman with the Instagram handle Whimsy Stems started following me last week, and as I browsed her pretty arrangements, I decided to get one for each Kaci and myself. Right after I snapped this photo and promptly advised Matt to get Rachel away from it, she bit a eucalyptus leaf and pulled it all down. Men sometimes. Hahaha 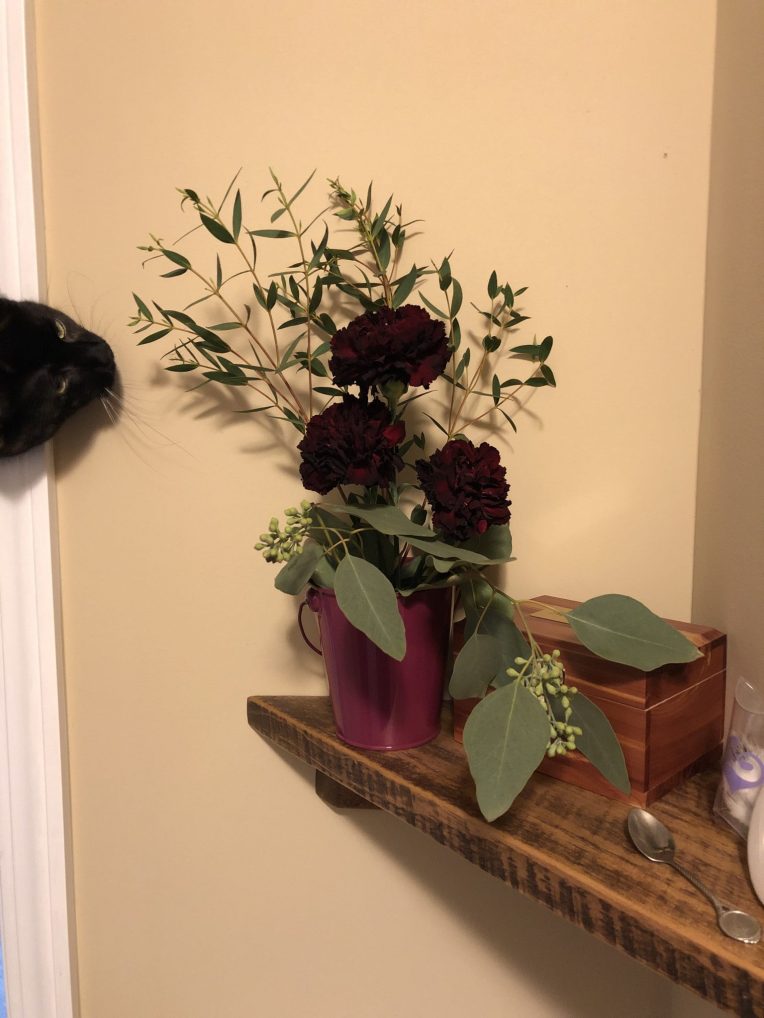 I chose the arrangement in the pretty pink pail, and I got Kaci the one in the deep pink vase. Both are so whimsical and pretty! I only wish the roses hadn’t already bloomed and started to wilt. She only just started this business, so you just have to figure out some things through trial and error!

I went to Wal-Mart to look for a frame for the item I bought from Jacks of Knoxville, and I ended up finding a pretty shadow box. Score! I didn’t stay long because that’s all I planned to purchase.

For dinner, I made our first curly sweet potato fries using our spiralizer, and I roasted green cabbage with freshly minced garlic. We ran out of  ketchup, so that’s why I had so little. Ha. We simply thawed rotisserie chicken that I topped with spicy brown mustard after sitting down.

I took Kase’s arrangement over to her after dinner, and my gosh we had some of the I’m-going-to-pee-myself-and-I-can’t-breathe laughs! I wanted to stay and continue gabbing, but it was getting late. One day I’m planning a sleepover, and we’re going to have an epic twin brunch and enjoy the day together!

Once home, I got changed and then made this snack plate to munch on while watching The Office. Shredded wheat, local dark chocolate, Adorb orange, and pistachios.

Could this kid be any cuter??

We went to bed really late (for me anyways – stayed up until midnight like a couple of party animals), but then we slept in until the eight o’clock hour. It was glorious! We did realize that somehow we never heard one of the babies throw up…on the bed. But I was not the least bit upset. It’s part of being a mama! So this time we stripped the sheets, comforter, and bed skirt to wash.

I had suggested that Matt make an egg hash out of the leftover sweet potato fries, and he was so generous and decided to split it! So we started with cereal again: shredded wheat, thawed fruit medley + cherry/berry/plum/cacao blend, almond cashew butter, and milk.

He wilted and shredded a bed of spinach, cooked the fries in a buttered skillet until they were crispy, topped it with crumbled cojita then an over easy egg for me, two for him. We had garlic oil hot sauce and avocado to complete it. Yum yum yum! 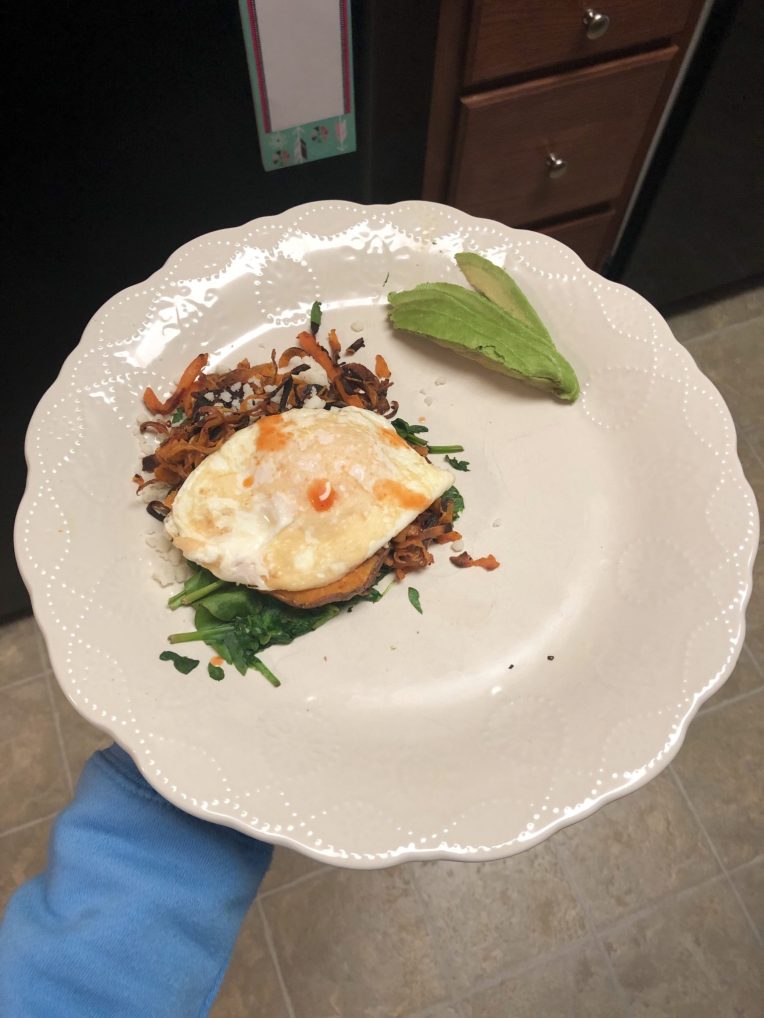 So I bought the pretty white shelving display off Amazon last summer but never hung it because I expected we would be moving soon. Since we haven’t, I realized it’s silly to wait. To wait until you accomplish x or hit y milestone to enjoy something you’ve been looking forward to. Matt helped me tremendously in hanging it along with our puzzle and our new shadow box!

I purchased the faux succulents last summer too. I was able to get these things thanks to my amazing dad’s sweet birthday gift card he gave to me.

I didn’t realize it came with these two LED candles, so that was a pleasant surprise. I am so excited to finally display our Golden Girls book, both my Alice in Wonderland and Nancy Drew books that I bought while we were in Columbus, OH last June, and Simi Botic‘s book ‘Letting Go of Leo’! I need to print a photo for the geometric photo frame. I love all of the angles and lines in the shelving unit, faux pots, and the frame.

I bought this Sunsphere post card and TN sticker at Jack’s. Here is the pretty local chocolate box that I kept from a few weeks ago along with such a pretty coaster from my friend as a gift last Christmas. 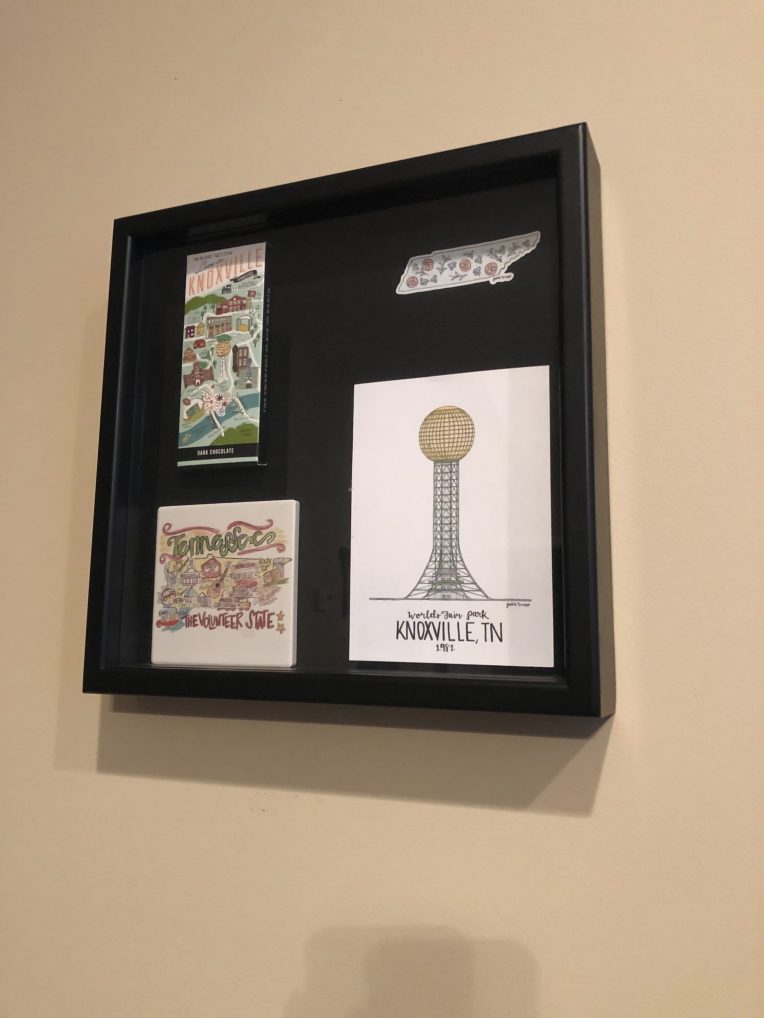 Lastly, I chose to hang our decorative skeleton key to enjoy as well. A mini gallery wall. I just need to print a photo for the frame.

I showered then enjoyed this snack-y lunch: bacon chive cream cheese on toast with cucumber, carrots with hummus, apple with cinnamon and pb.

I did my first thrift shopping at Goodwill, and I so enjoyed it! I saw a set of chairs that I adored, but sadly, we can’t justify buying them until we move and figure out what we need. They were only $35 each!

I am sooo excited for what I found! I snagged a dress for $6 and change that is just perfect. I’ll be wearing it to my best friend’s wedding this April. I hate having to wait, but it’ll be worth it I think. 🙂

I went to Kroger with a ton of coupons in hand. I picked up a bar to snack on while I shopped that I was going to pay for at checkout, but ohmygosh it was horrid! It was by Good Greens. Highly recommend you never try their products. It was already melted, and it made my eyes water and throat burn. I don’t know what in it didn’t agree with me, but the flavor was vom-worthy. Instead, I chose this bar, which was far better.

I still ended up paying for that bar, but I’m all about honesty. I could’ve just tossed it, but it was my choice to try it. Ya win some, and ya lose some!

We had our leftover pho for dinner, then I applied my lavender orange clay mask. I do think it helped the dryness around my schnoz.

My snack was so full of flava. Greek yogurt with lemon curd, pistachios, and Love Grown chocolate Power O’s. We watched only one episode of The Office then realize how late it already was. I was in denial that Monday was coming.

But here we are! Oatmeal was incredibly soul-satisfying. I cooked our beloved Ancient Grains instant oats with milk, water, and a pinch of salt. Then I heated berry/cherry/plum/cacao on top and added lemon curd and tahini. Winning combo!

I certainly hope you all have the most beautiful day and week ahead! Please feel free to share highlights from your weekend in the comments!

8 thoughts on “One More for Good Measure”